In the United States, we celebrate Labor Day in September. In other countries around the world, May 1st is recognized as a day of celebration and advocacy for workers’ rights.

On May 1st, 1886, hundreds of thousands of workers across the globe held a general strike for an eight-hour workday.

Days later, a bloody conflict at a rally in Chicago’s Haymarket Square shook the labor movement and the country.

To commemorate these events, May 1st was declared International Workers’ Day in 1889.

Not all workers are covered: farm workers, seasonal workers, and others are still fighting for fair wages and safe working conditions.

Check out the books below to learn more about labor history and hear workers’ stories.

You can also do your own work, work on your career, and work your brain at DPPL.

Use our study rooms, take computer classes, get help with test preparation, and check out STEM discovery kits.

While you’re here, DPPL cardholders can pick up a free “WORK” hat.

No card? No worries! Sign up for a library card while you're here. 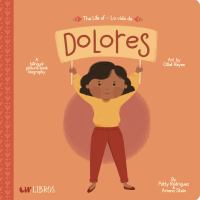 by Patty Rodriguez and Ariana Stein

Introduces little ones to the life of legendary civil rights activist Dolores Huerta, in both English and Spanish! "Si, Se Puede! Yes, it can be done!" is the famous rallying cry of Dolores Huerta, a leading voice in the rights of migrant farmworkers. Inspire your little ones to believe in themselves and become leaders, just like Dolores!

A board book for young readers. 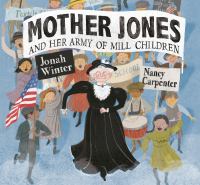 Mother Jones and Her Army of Mill Children

Well into her sixties, Mother Jones had finally had enough of children working long hours in dangerous factory jobs, and decided she was going to do something about it. The powerful protests she organized earned her the name "the most dangerous woman in America." And in the Children's Crusade of 1903, she lead one hundred boys and girls on a glorious march from Philadelphia right to the front door of President Theodore Roosevelt's Long Island home.

A picture book best for grades K and up. 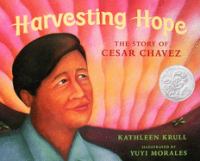 A biography of Cesar Chavez, from age ten when he and his family lived happily on their Arizona ranch, to age thirty-eight when he led a peaceful protest against California migrant workers' miserable working conditions.

A picture book best for grades 2 and up.

Bread and Roses, Too

Rosa's mother is singing again, for the first time since Papa died in an accident in the mills. But instead of filling their cramped tenement apartment with Italian lullabies, Mamma is out on the streets singing union songs, and Rosa is terrified that her mother and older sister, Anna, are endangering their lives by marching against the corrupt mill owners. After all, didn't Miss Finch tell the class that the strikers are nothing but rabble-rousers--an uneducated, violent mob? Suppose Mamma and Anna are jailed or, worse, killed? What will happen to Rosa and little Ricci? When Rosa is sent to Vermont with other children to live with strangers until the strike is over, she fears she will never see her family again. Then, on the train, a boy begs her to pretend that he is her brother. Alone and far from home, she agrees to protect him... even though she suspects that he is hiding some terrible secret. From a beloved, award-winning author, here is a moving story based on real events surrounding an infamous 1912 strike.

Best for grades 5 and up.

A gorgeously told novel in verse written with intimacy and power, Audacity is inspired by the real-life story of Clara Lemlich, a spirited young woman who emigrated from Russia to New York at the turn of the twentieth century and fought tenaciously for equal rights. Bucking the norms of both her traditional Jewish family and societal conventions, Clara refuses to accept substandard working conditions in the factories on Manhattan's Lower East Side. For years, Clara devotes herself to the labor fight, speaking up for those who suffer in silence. In time, Clara convinces the women in the factories to strike, organize, and unionize, culminating in the famous Uprising of the 20,000.

Best for grades 6 and up.

Bella and Yetta work together at the Triangle Shirtwaist Factory under terrible conditions--their pay is docked for even the slightest mistake, the bosses turn the clocks back so closing time is delayed, and they are locked into the factory all day, only to be frisked before they leave at night to make sure they haven't stolen any shirtwaists. When the situation worsens, Yetta leads the factory's effort to strike, and she meets Jane on the picket line. Jane, who feels trapped by the limits of her own sheltered existence, joins a group of high-society women who have taken an interest in the strike as a way of supporting women's suffrage. Through a series of twists and turns, the three girls become fast friends--and all of them are in the Triangle Shirtwast Factory on March 25, 1911, the day of the fateful fire.In a novel that puts a human face on the tragedy, Margaret Peterson Haddix has created a sweeping, forceful tale that will have readers guessing until the last page who--if anyone--survives.

Best for grades 7 and up.

A graphic novel adaptation of Upton Sinclair's novel in which a young Lithuanian immigrant, hoping to create a good life for himself and his family in the early 1900s, is discouraged by the shocking conditions he encounters as a worker in the Chicago stockyards.

For teens and adults.

Working Words: Punching the Clock and Kicking Out the Jams

From the White Stripes' "The Big Three Killed My Baby" to Eminem's "Lose Yourself"; from the folk anthems of Bob Dylan and Woody Guthrie to the poems of Walt Whitman and Amiri Baraka; from the stories of Willa Cather and Bret Lott to the rabble-rousing work of Michael Moore—this transcendent volume touches upon all aspects of working-class life.

A collection about living while barely making one, about layoffs and picket lines, about farmers, butchers, miners, waitresses, assembly-line workers, and the "Groundskeeper Busted Reading in the Custodial Water Closet," this is literature by the people and for the people.

Death in the Haymarket: A Story of Chicago, the First Labor Movement, and the Bombing That Divided Gilded Age America

On May 4, 1886, a bomb exploded at a Chicago labor rally, wounding dozens of policemen, seven of whom eventually died. Coming in the midst of the largest national strike Americans had ever seen, the bombing created mass hysteria and led to a sensational trial, which culminated in four controversial executions. The trial seized headlines across the country, created the nation’s first red scare and dealt a blow to the labor movement from which it would take decades to recover. Death in the Haymarket brings these remarkable events to life, re-creating a tempestuous moment in American social history.

Fight Like Hell: The Untold History of American Labor

Freed Black women organizing for protection in the Reconstruction-era South. Jewish immigrant garment workers braving deadly conditions for a sliver of independence. Asian American fieldworkers rejecting government-sanctioned indentured servitude across the Pacific. Incarcerated workers advocating for basic human rights and fair wages. The queer Black labor leader who helped orchestrate America’s civil rights movement. These are only some of the working-class heroes who propelled American labor’s relentless push for fairness and equal protection under the law.

Inspirational, intersectional, and full of crucial lessons from the past, Fight Like Hell shows what is possible when the working class demands the dignity it has always deserved.