On this episode, Charlie, Ariana, Joel and Lydia discuss their likes and dislikes when it comes to horror films. They talk about the horror-comedy Tucker & Dale vs. Evil at length, and also touch on other scary films such as Midsommar, The Blair Witch Project, Young Frankenstein and more!

Listen to their conversation in the player below:

Place a hold today on some of the horror movies discussed in this episode:

This dark comedy takes characters and scenarios that have become common cliches and tropes in horror films (a group of college kids on vacation encounter a pair of creepy-looking old men in a cabin in the woods) and turns them on their head. The result is a clever farce with equal parts gratutious gore and unexpected sweetness. (Also available for free streaming from Kanopy and Hoopla.)

A folk-horror film from the film studio A24 that follows a group that travel to Sweden for a celebration of the summer solstice. Before long, they are in the grips of an ancient commune with some unsettling traditions. (Also available for free streaming from Kanopy.) 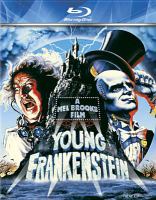 Mel Brooks' classic parody of Universal horror films follows Dr. Frederick Frankenstein (that's pronounced FRONK-en-STEEN, thank you) as he continues the experiments of his mad scientist ancestors: reanimating human life. A rare comedy that remains funny (and very quotable) no matter how many times one watches it.

The framing device of this film (that it consists entirely of found footage shot by three young filmmakers who went missing) caused some controversy upon the film's release, as it was marketed as being based on a true story. But the film's handheld cinematography and improvisational nature give it a realism that is still effective.