Jordan Peele’s Get Out was a monumental success garnering multiple award nominations, receiving high critical praise and earning over 255 million at the box office.

Us, Peele's latest film, is quickly gathering the same reception, debuting as the best live action original film since 2009 Avatar.

Though both films differ in tone, both bring something more to the horror genre than just scares.

Both Get Out and US leave the viewer with something to think about and begs the viewers a second watch.

In fact the Horror genre has a history of films that do more than just scare viewers.

George Romero's Dawn of the Dead was part commentary on consumer culture. Invasion of the Body Snatchers stemmed from the fears of enforced conformity.

Horror novels are no strangers to having political and social commentary.

Here is a list of Horror Novels that I consider to be as thought provoking as Jordan Peele’s US:

Frankenstein in Baghdad by Ahmed Saadawi

Ahmed Saadawi takes Mary Shelley’s Frankenstein and sets the story in Unite States occupied Baghdad around 2005.  When a junk dealer loses his best friend in a bombing, he resolves to give his best friend a proper burial. Needing a complete body, the junk dealer collects body parts and stitches them together.  However, as the corpse goes missing more and more people start disappearing. Frankenstein in Baghdad is a novel focused on the horror, the violence, and chaos of living in a war torn city.

The Devil in Silver by Victor Lavalle

Victor Lavalle’s The Devil in Silver is about mental illness, institutionalization and basic human rights.  Taking place in a psychiatric wing of a hospital and centering around a new admit due to be revaluated and possibly released in 72 hours.  In the night, a terrifying presence stalks the ward.  The novel is a character portrait of both the patients and staff of the ward.

Something happens when women go to sleep; they become shrouded in a cocoon-like gauze. If they are awakened, if the gauze wrapping their bodies is disturbed or violated, the women become feral and spectacularly violent; and while they sleep they go to another place. The men of our world are abandoned, left to their increasingly primal devices. One woman, however, the mysterious Evie, is immune to the blessing or curse of the sleeping disease. Is Evie a medical anomaly to be studied, or is she a demon who must be slain? 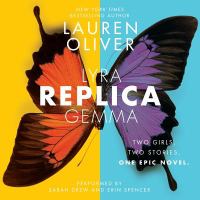 Replica is a dual novel, about two teens, with one story starting on one side of the book and the other story starting on the flip side. Lyra is #24 of experimental subjects at a research facility. Gemma is a teen with controlling parents and a history of health problems. The two meet on the night protesters bomb the research facility, and they begin working together to discover how their lives are inextricably entwined.

Betrayed by the two persons she trusts the most, Josie jumps at the chance to trade places with her twin in a parallel universe until Josie becomes trapped in a dangerous world where shadowy creatures feed on human flesh.