On any given week, I can tell you what board game was left on our kitchen table from recent play.

Or which I'm anticipating opening for our next game night.

As a former YA librarian, I also spent the last 5+ years playing board and card games in teen programs each week.

Board games have evolved to include some pretty complex mechanics and more varied themes.

Going beyond the fact that board games have been proven to boost cognitive function.

Here are a few skills or life-lessons that have come into focus through the lens of playing board games:

One of the most important ways board games cultivate maturity is that they offer small-scale practice in handling disappointments.

I've seen kids go from being unable to tolerate losing to learning how to lose well, accept it, and still enjoy the time they spent with others.

I've also seen some of the shyest kids (and introverted adults) able to bond with others in a single session and develop deeper friendships over a series of sessions.

Something about having a fun, shared activity with some structure allows many people to come out of their shell, and that benefits those who get to know them too.

Not to mention, consideration for others is a learned behavior.

People like to play with people who are just as invested as they are, and participating means being a good sport, not inconveniencing others by never knowing when it's your turn, etc.

#2:  Moving forward despite disappointments or failures

This is included in the first point above, but warrants attention.

Like life, you have a mix of your own effort thrown in with the consequences of other's actions, and pure chance.

Any of these can throw off your efforts to play well but you keep going!

There isn't much time to be upset about unexpected blows and twists, or to regret decisions you wish you'd made differently -- because on your turn, you march forward with what you have now.  You make the next best choice.

Also like life, we have games where players start out with their own unique bonuses or advantages. Even if you’ve been dealt a bad hand, you still try make the best out of your situation.

There is so much problem solving in game strategy. I don't think that needs elaboration.

However, I will add that this ties in with social-emotional skills - surprise!

Some games are in a "programming" category, in which each player plans out a set of moves in order, and it plays out as they prepared.

This means everyone's independently plotting their course and they have to sleep in the bed they made.

Seeing this, you might realize that if a player has thwarted another's plans, it doesn't necessarily mean people are trying to be mean. It could just be that their objectives cross.

Part of the fun of playing any game is that you can take measured risks -- or adventurous risks simply for curiosity's sake -- in a no-risk environment.

What have you got to lose?

You can lose it ALL in the game, and in the end you're no worse off in your real-life health or wealth.

Plus, you're probably now richer in memories and relationships with those you spent time playing with.

We have board games on the library's 2nd and 3rd floors which you can check out with your library card.

Here are just a few of them: 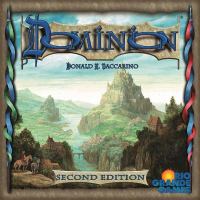 You want a bigger and more pleasant kingdom, with more rivers and a wider variety of trees. You want a Dominion. In all directions lie fiefs, freeholds, and feodum. All are small bits of land, controlled by petty lords and verging on anarchy. You will bring civilization to these people, uniting them under your banner. But wait. It must be something in the air, several other monarchs have had the exact same idea. You must race to get as much of the unclaimed land as possible, fending them off along the way

In this game, players collaborate as members of a disease-fighting team combating four deadly diseases. The team travels around the world to stop the infection and develop resources for the cures. Players win by discovering cures for the four diseases, but lose if they do cannot do so fast enough or if they fail to effectively keep the number of infections in check. 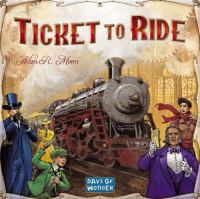 Players attempt to gain the most points through claiming routes and completing paths of routes through North America. 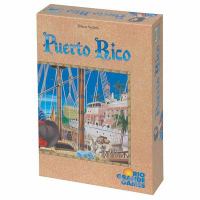 Players compete to ship the most goods, but a variety of production buildings can be purchased with money earned from selling crops, allowing each player to gain an edge over their competition.